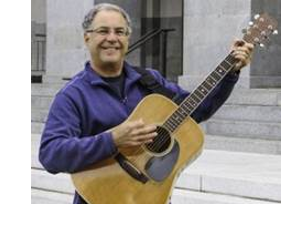 David Panush writes a song for just about every turning point in life. The former external affairs director for Covered California, who retired two years ago at 56, wrote his theme song for retirement, sort of a country/blues tune—“you don’t know where you’re going to, what you’re gonna do, you gotta make the most of every day….” Panush will likely serenade wife Eve Krotinger-Panush – retired after 33 years at Legislative Counsel – with a song when they celebrate their 35th wedding anniversary in a few weeks on December 26.

His 35-year Capitol career inspired a tune or two as well. The majority of his career was spent working as a health policy advisor for several Senate Pro Tems, the last of which was Darrell Steinberg. From there he went to Covered California. One day the Covered California legal folks needed urgency legislation to allow for background checks of call center employees. The bill’s substance wasn’t a problem, however its pressing time demand led Panush to compose “The Background Check Blues.” He says he’s happy to share an MP3 of it if by chance someone else in the Capitol community is met with a similar situation.

Panush was there at the beginning of Covered California and helped get it up and running. He said his four years there were the highlight of his career. “It’s not very often than you get a chance to be a part of something that big and far reaching,” Panush said.

Panush writes songs not just to commemorate turning points, but also as part of his role in Remedy 7, a local seven-member band that includes former Capitol staffer-now-lobbyist Michael Miiller, Capitol staffer Hugh Bower, former staffer and lobbyist Steve Suchil, and three members from outside the Capitol, two of whom Panush describes as amazing singers. They do about 15 gigs a year, many of them fundraisers and events for nonprofits, playing mostly for free.

Also keeping Panush busy is a consulting firm called California Health Policy Strategies, which he founded after he retired from Covered California. His colleagues in the firm are, like him, retired and possessing robust resumes: David Maxwell-Jolly, former Department of Health Care Services director among many other posts; Bruce Wagstaff, formerly with the Department of Social Services; Brent Barnhart, former director of the Department of Managed Health Care; and Jane Ogle, also from DHCS and an expert on Medi-Cal and hospitals.

The firm just finished a project funded by the California Healthcare Foundation, dealing with re-entry programs for former inmates who need mental and physical health care as well as social services. The group is also working on a project with the California Optometric Association that involves optometrists in improving detection of uncontrolled diabetes and helping improve diabetes care among Medi-Cal managed care plans.

Panush and his wife, Eve – who met in 1977 when both worked as summer interns in the Capitol – have done some travel since retiring. They’ve checked the Czech Republic, Hungary, Slovakia and Myanmar off the bucket list, and are planning a trip to Japan – Kobe and Kyoto – in 2018. Their children are grown: Michael, 28, is a teacher and a writer who has published 10 young adult novels; and Jenny, 24, just started work at a Los Angeles advertising agency.

When he’s not traveling, Panush practices with the band once a week. He said he has no idea how much time he spends at Cal HPS; it’s not work to him like work used to be. It’s extension of his career, only with less stress – yet still retaining the potential to inspire a new song.